In the opening moments of 2017’s Nier: Automata, the game smoothly transitions between a vertical shooter, a twin-stick shooter, a third-person melee action game, a side-scrolling platformer, and a few other modes. But more than just including a bunch of minigames, it deploys these modes of gameplay as language. Each use of a gameplay type is a statement, about the game, the world it inhabits, and the relation between the actions the player is performing and the ideas the game is communicating. 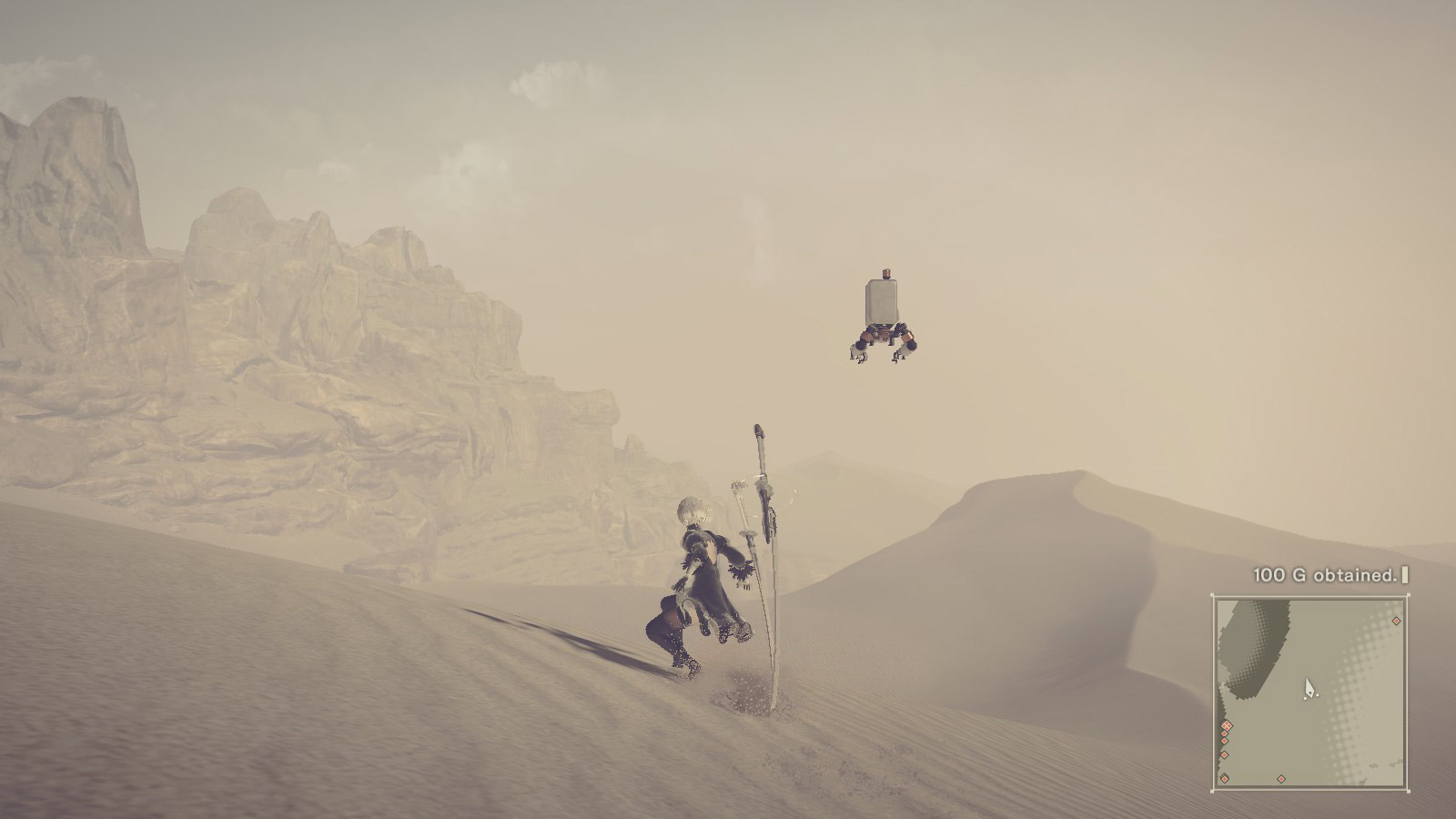 Minigames are common in videogames, particularly those in the genre valley that hybridizes a JRPG progression structure with third-person action. In the ’90s, one common development approach was to treat each minigame as a bespoke interaction. Final Fantasy 7, for example, frequently interrupts the JRPG exploration and active-time-battle combat modes with one-off minigames: one early one involves fleeing attackers with Aerith while pushing crates on their heads. These minigames either repurpose trigger-based exploration gameplay or have their own custom system (as in the tower-defense minigame). The minigames are largely departures from the main gameplay.

Some games were essentially composed entirely of minigames, with the over-arcing progression structure mostly confined to moving to the next self-contained level. This was also one of the design approaches some CD-ROM video-backdrop games used with games like Cyberia (1995) and Star Wars: Rebel Assault II - The Hidden Empire (1995) swapping between different flavors of rail-shooter levels, puzzle levels, etc. At the extreme end, each level might be its own bespoke minigame, possibly with little code shared between levels.

However, some designers had realized that they could reuse minigames, assembling a larger game out of individual parts. Action platformers such as Beyond Good & Evil (2003) took integrated boat driving, melee combat, and photography with the soup of the ur-videogame platforming and puzzle-solving. The different minigame-modes became verbs in themselves, with the camera being used for both its own wildlife photography minigame and as part of other puzzle-solving.

Alternately, the major gameplay mode can be coerced to create puzzles and minigames that exist within the primary game rules. Half-Life 2 (2004) has many straightforward examples: using the game’s guns and physics simulations, each level is a series of puzzles and encounters that ask the player to use their tools to interact with bespoke scenarios.

A separate strand is fixed-camera third-person games, such as Alone In The Dark (1992) and Resident Evil (1996). While fixed camera games typically retain the same gameplay between scenes, the use of different camera angles for each scene frequently necessitate reorienting to the new perspective. There are some similarities to the theatrical presentation of point-and-click adventure games, but retaining the more direct third-person-action input.

Minigames are a natural fit for the JRPG model: the design tradition inspired by Wizardry: Proving Grounds of the Mad Overlord (1980) separated the dungeon-crawling exploration from the separate turn-based combat mode. It’s a relatively small leap to the idea that any minigame could be used as a combat mode. But the JRPG exploration/combat progression structure wasn’t the only design. Many games incorporated a design of a game-made-up-of-games. A few interesting examples: Cinemaware’s B-movie inspired It Came From The Desert (1989), Sid Meier’s Pirates! (1987), and Danielle Bunten Berry’s M.U.L.E. (1983) and Seven Cities of Gold (1984).

It Came From The Desert is an interactive narrative, with the player travelling around on a map an encountering dialog-tree conversations and minigames that represent various activities. These fed into each other: getting injured in the knife-fight minigame or during an attack by giant ants took the player to the escape-the-hospital minigame (because waiting around to get discharged would take too long and doom the town). Pirates! combines sailing, ship-to-ship combat, sword duels, trading, and so on, expressing each pirate-y activity as a different minigame. One influence on the design of Pirates! was Seven Cities of Gold, which similarly deployed minigames to represent different activities in its Columbus/Cortez simulator. However, unlike the way that Pirates! changed UI paradigms between modes, Seven Cities of Gold often reused the same movement interface: making menu selections while preparing in Spain was represented by a character walking through town. M.U.L.E.’s one-button-joystick UI was an even purer form of this interface-unification between minigames: the players’ character was the interactor in almost every mode, including surveying land, placing the eponymous M.U.L.E.s, and buying and selling during the auction phase.

Because they use a unified interface, the different gameplay modes in M.U.L.E. speak with harmonized voices in a way that other games don’t attempt. Interfaces that would more normally be represented by directly inputting numbers take on new meaning when the player has to physically steer their character up and down the screen to state their buying or selling price.

Nier: Automata’s smooth transition between gameplay modes engenders a similar effect. A transition between over-the-shoulder third-person and side-scrolling interaction without cutting or interruption allows the game to make a diegetic statement about the space the player is moving through. A feeling of architecture and space that would take a great deal of work to feel natural in a free-camera environment is succinctly summarized through the use of a different camera perspective. But unlike fixed-camera horror games, the gameplay context also shifts: without changing the player’s verbs, switching to a side-view perspective also shifts the gameplay to a side-scrolling platformer. 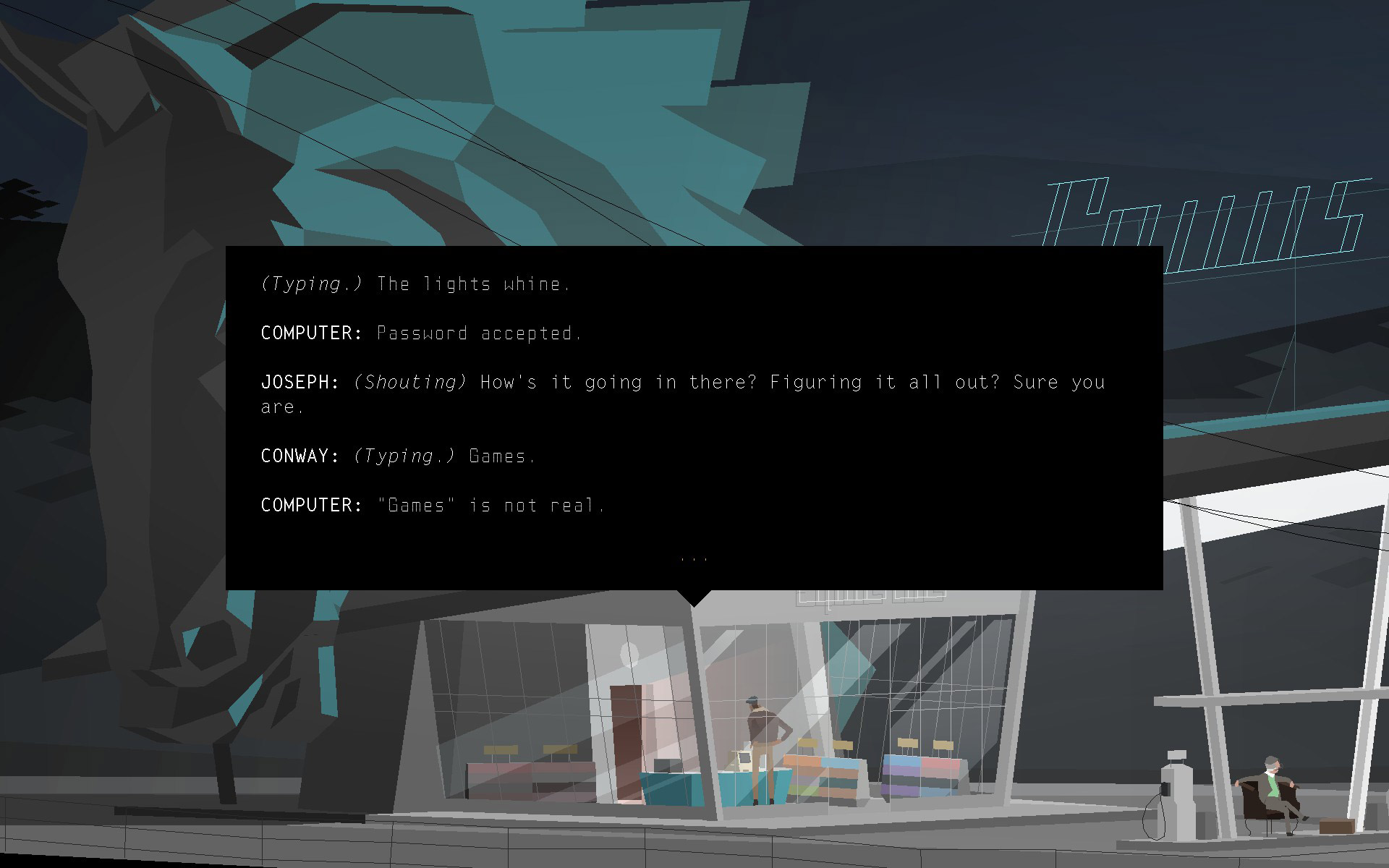 Similarly to embrace of theatrical abstraction in Kentucky Route Zero (2013-2020), Nier: Automata makes the videogame-ness central to its language of interaction. The different modes are deployed consistently. Each gameplay mode is associated with a particular scenario or context: the flying top-down shooter mode requires specific equipment, allowing the player to anticipate it and associate it with its context. By acknowledging that it is a videogame, Nier: Automata can use the different minigame interaction modes as part of the language it uses to communicate with the player.

Departing from considerations of immersion and realism, it is freed to instead ask what each interaction can be used to express. This extends to the usually non-diegetic interface elements. Saving the game is explicitly tied to in-game-world objects (which act as body vending machines reiterating the themes of the self and the sometimes tenuous relationship between embodiment and identity). Characters talk about the system menus. Interface elements are tied to the character’s equipment loadout. By acknowledging that the game exists as a game, the design can incorporate the usually non-diegetic interface details into the player/machine communication channels.

Similar to cinematic language, we occasionally speak of a ludic language1 or language of play. But this goes beyond a simple verb-action gameplay association and instead treats the modes of gameplay as language units in themselves. The meta-gameplay of switching to a side-scrolling perspective delimits the context for that section of the game: we must now engage with this part of the level through the lens of platformer mechanics, dynamics, and aesthetics.